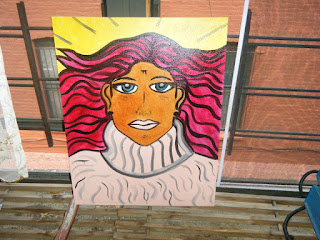 I don't consider myself a true artist. I may have a Chinese symbol on the back of my neck stating this title, but I've never felt that I've paid my dues in this medium. As I've mentioned in previous entries, I took up painting to relieve long-standing writer's block that refused to go away. I picked up my first paint brush in 2005. After taking oil painting with LaGuardia College in 2006, I embarked on a satisfying relationship. I still, however, think of myself as very much an amateur.

The canvas forces honesty in a way that writing simply can't now. I sketch and paint mostly freestyle, allowing my movements no forced control or effort. I just let it all out. So when I painted this some months ago, I looked at the canvas with feelings of recognition. This is how I see myself inside once every nuance and layer is stripped away. It's been hard to think of myself as beautiful throughout my life. My upbringing gave me plenty of opportunities to focus only on my negative atttributes, which were always harped on to no end.

But here, I found that I was able to finally admit to myself that inside, I'm beautiful, worthy and competent. That's a fantastic realization that didn't require a therapy session at $250 an hour.
Email ThisBlogThis!Share to TwitterShare to FacebookShare to Pinterest
Newer Post Older Post Home